Surprise 🎉 It’s time to make this amazing DIY party slime! This is the BEST crunchy and sparkle slime full of a silver and gold – it’s so colorful. This is an easy homemade party slime recipe.

Easy and fun slime recipe that you can whip up right now. This is the perfect slime recipe you can make for yourself or give as a gift – slime lovers will love this party slime as a gift. Learn how to make party slime that will be loved by kids, teens and tweens.

This slime would make a great birthday party activity or great party favors  (just store in slime jars and add a cute tag) for a slime theme party. This is also the perfect New Years Eve slime activity and New Years Slime recipe.

Are you ready to learn how to make slime? Let’s make some fun, squishy, stretchy, crunchy and simple DIY party slime. Get ready for the BEST party slime!

For More Great Slime Ideas Check These Out! 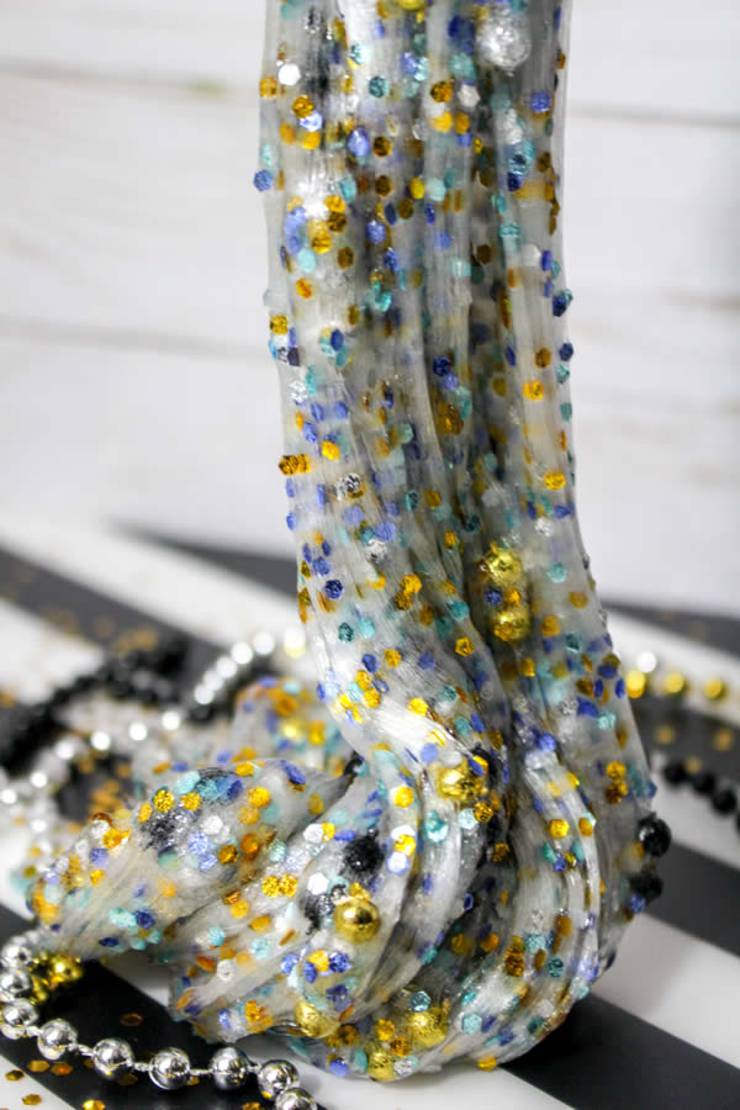 Start by cutting a beaded necklace into small pieces 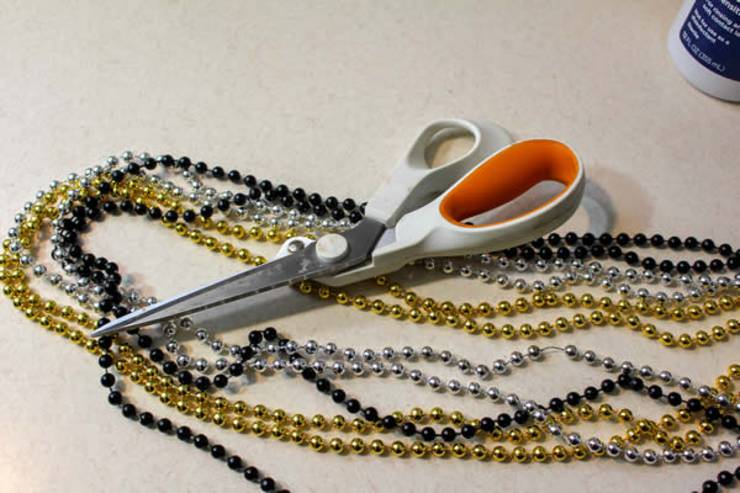 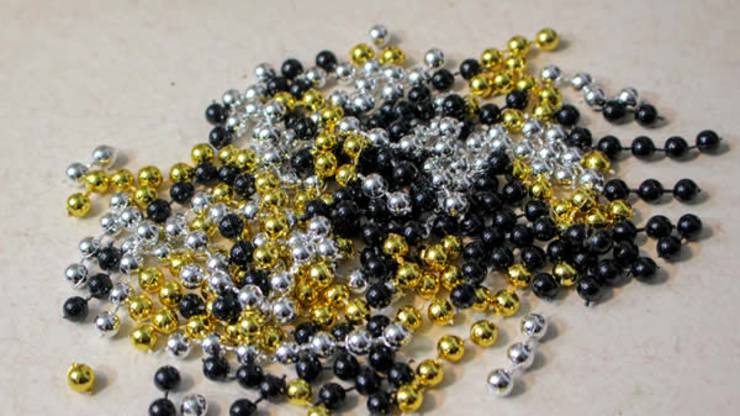 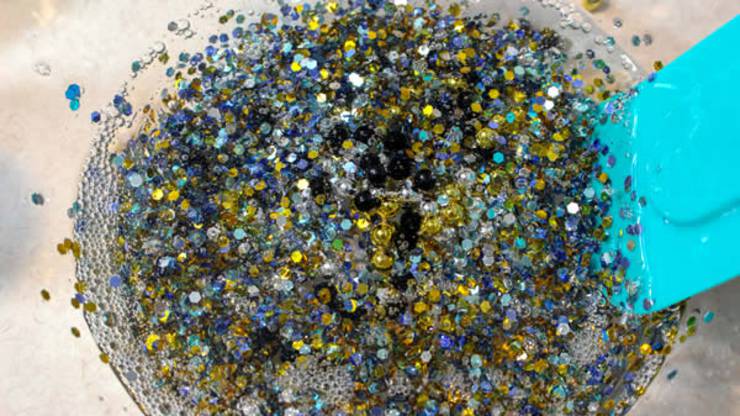 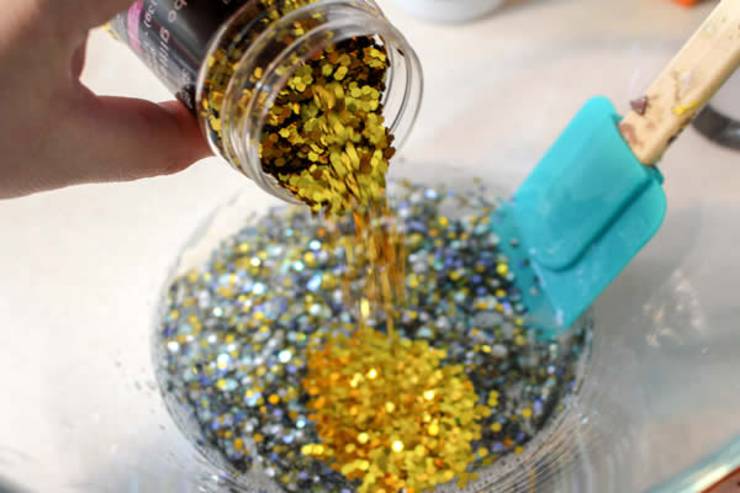 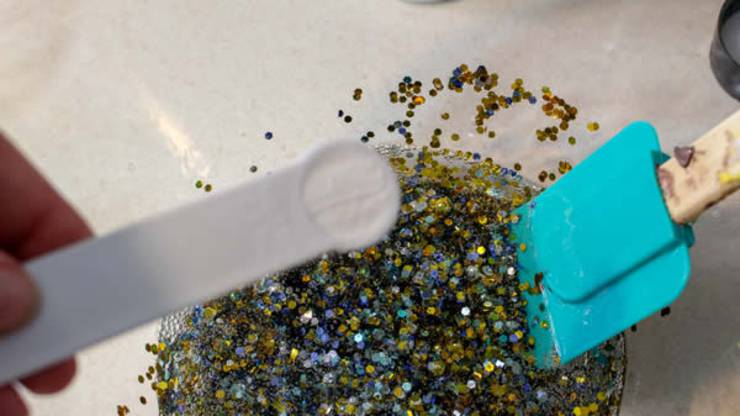 Work slime with your hands 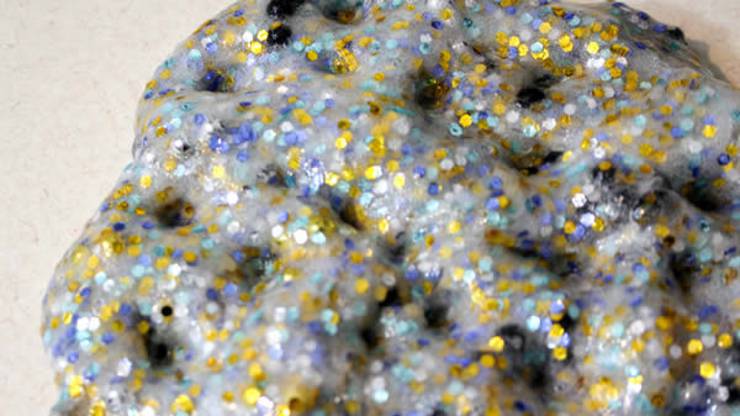 If using for party slime use any kind of candles and if you using for New Years Eve slime
Cut the sticks and wicks off the candle numbers. 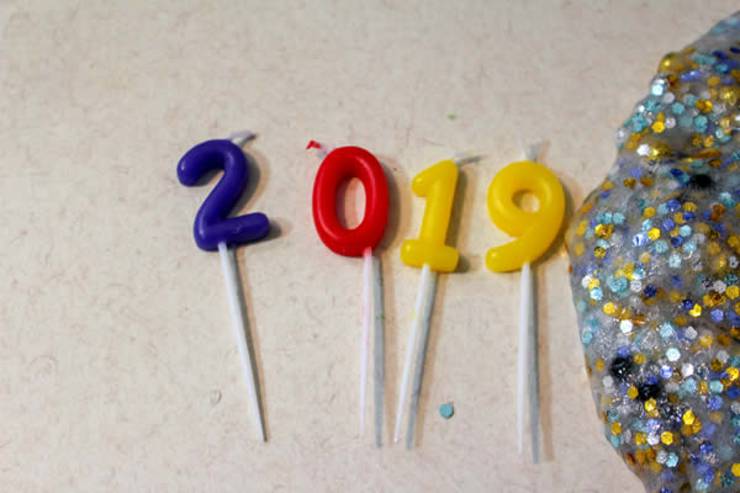 Add the numbers to your slime 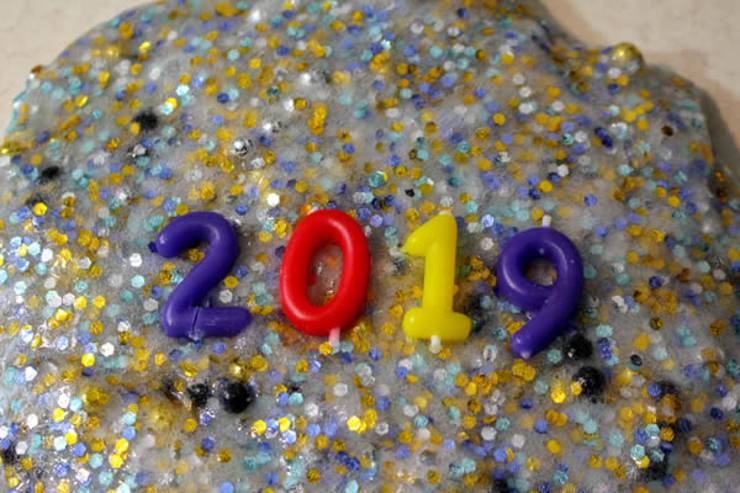 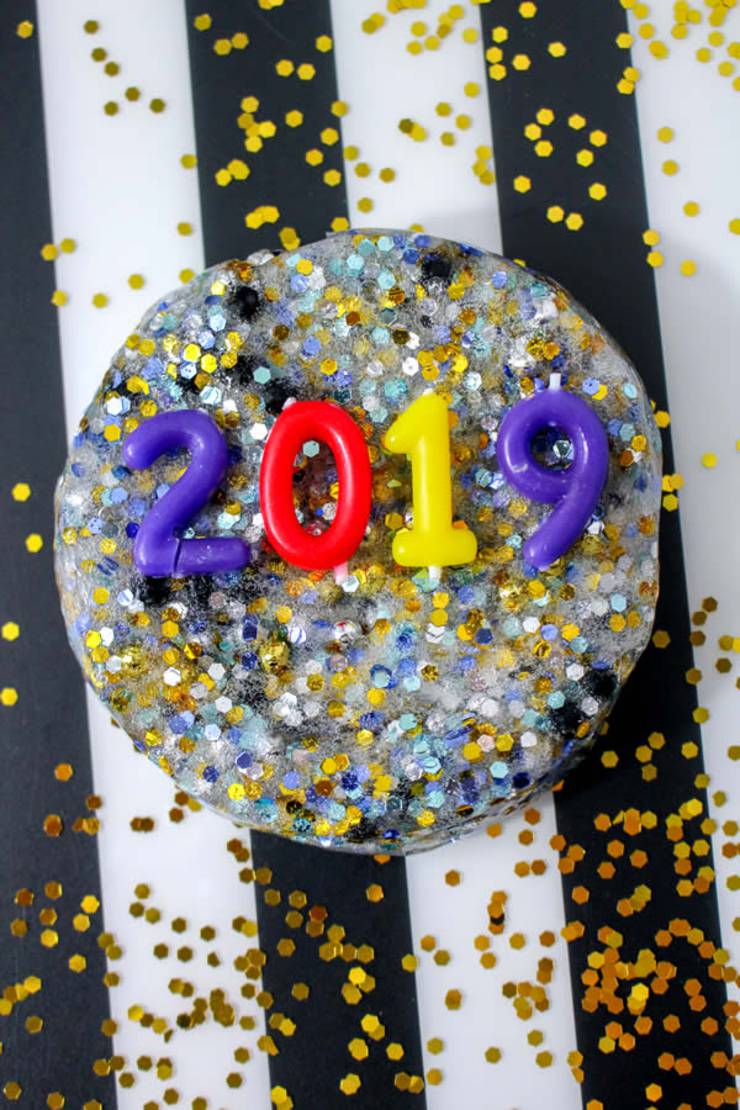 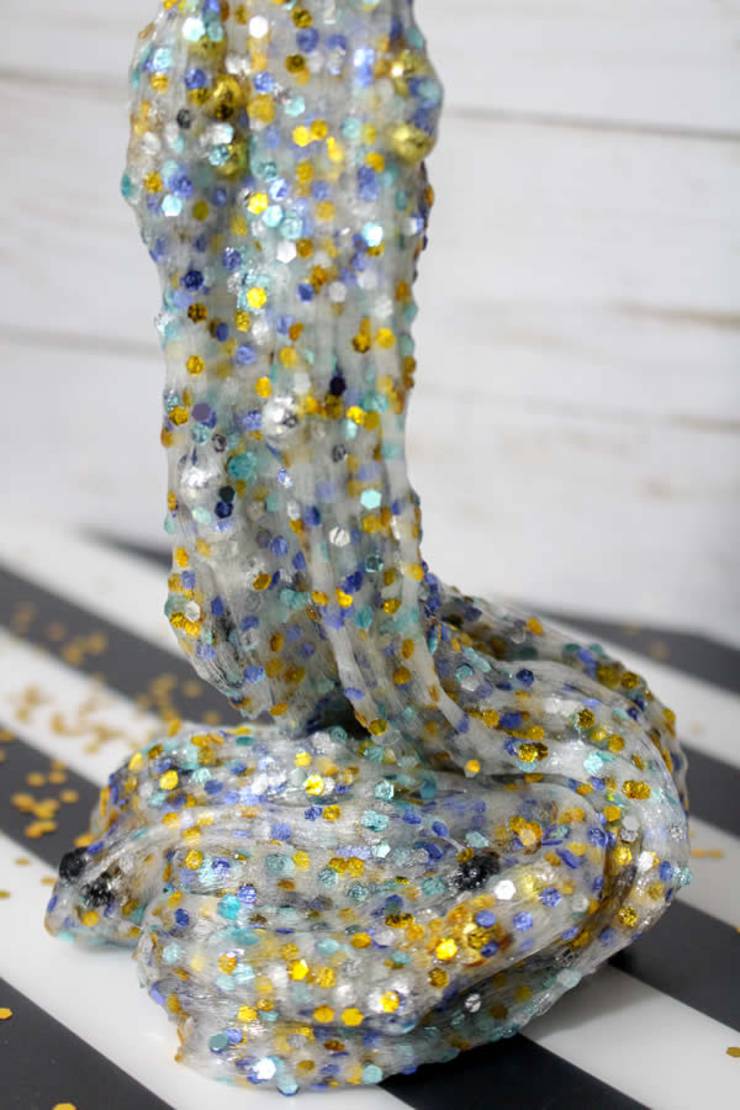 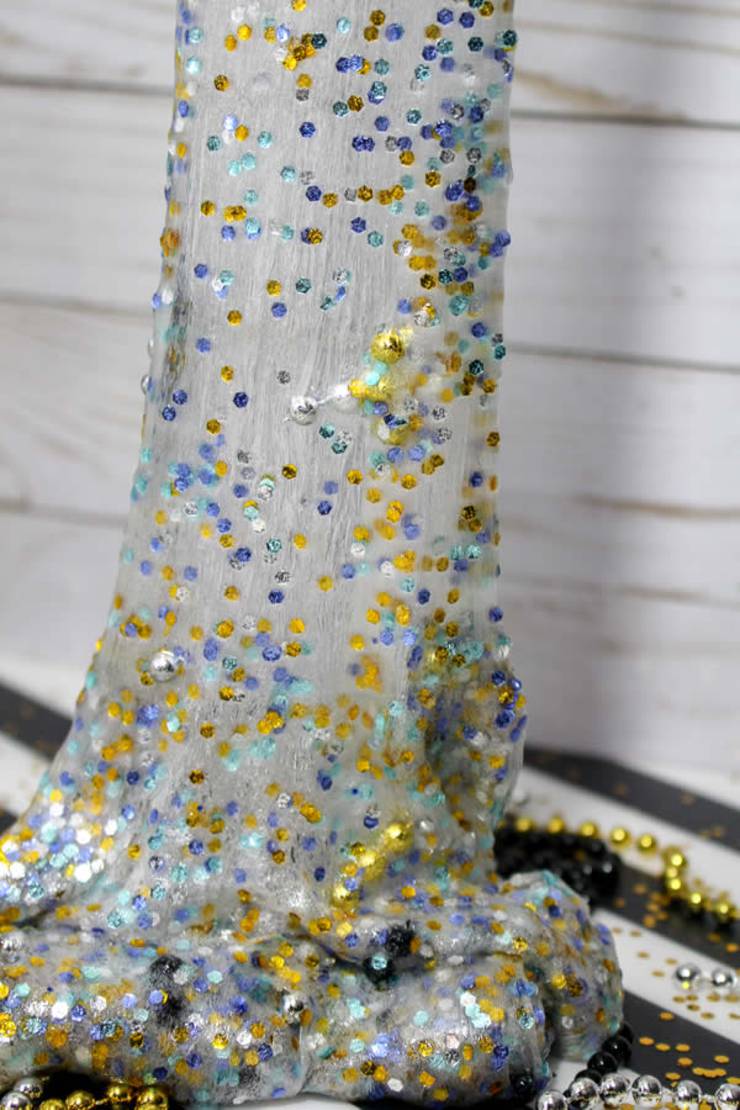 Instructions:
Start by cutting a beaded necklace into small pieces
Add 5 oz clear glue to a bowl
Add 1/2 cup water and mix together
Sprinkle in glitter – gold and silver
Stir in 1/2 tsp baking soda
Slowly add 1 tbsp of contact solution and stir until it forms slime
Work slime with your hands
Cut the sticks and wicks off the candle numbers. Add the numbers to your slime
Store in an slime container / slime jar
Happy New Year!

Don’t forget to Pin! So you can come back and make this fun DIY slime recipe!

Are you loving this DIY party slime? This party slime is an easy crunchy slime you can make today. It makes a stretchy slime that you can pull, poke and have fun with. It makes great sensory play for kids and also provides stress relief which can help with anxiety. Male this as a birthday party activity or as a New Years Eve activity for the kids. Most of all it’s just fun to make homemade slime that has a sparkle of colors in it! This is a great DIY slime made without borax and without liquid starch. Kids will love the sparkles and beads in this slime. If you add more beads you can make it a super crunchy slime. I hope you enjoyed this sparkle party slime. If you need more slime DIYs, ideas or inspiration you can check out Pinterest. You can find slime without glue, slime with contact solution, galaxy slime, edible slime, glitter slime, 2 ingredient slime, butter slime, clear slime, unicorn slime, floam slime and so much more. Again this slime is super fun and awesome to play with but would also make a great birthday party slime activity or make ahead and give as party favors. No matter how you use it – have fun! 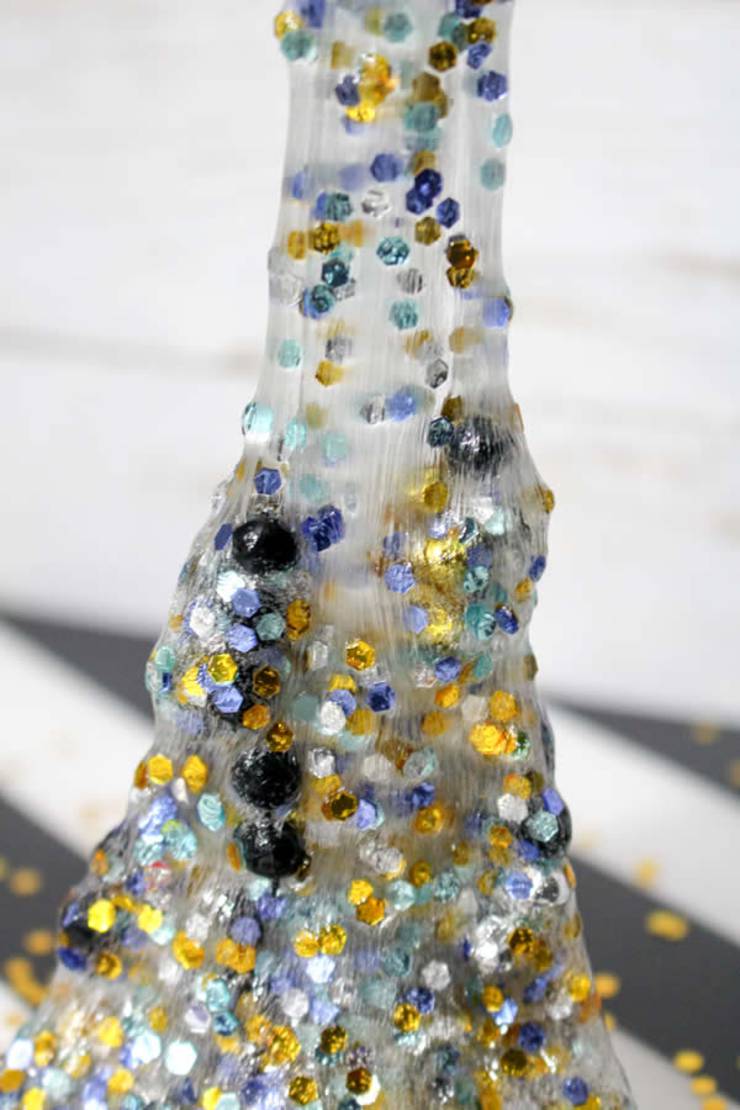 Now you know how to make DIY party slime you can save for later if you don’t have
time to make it now. Remember this would make a great slime activity for kids,
party favor idea or sensory activity. Make homemade party slime that is super fun & amazing! 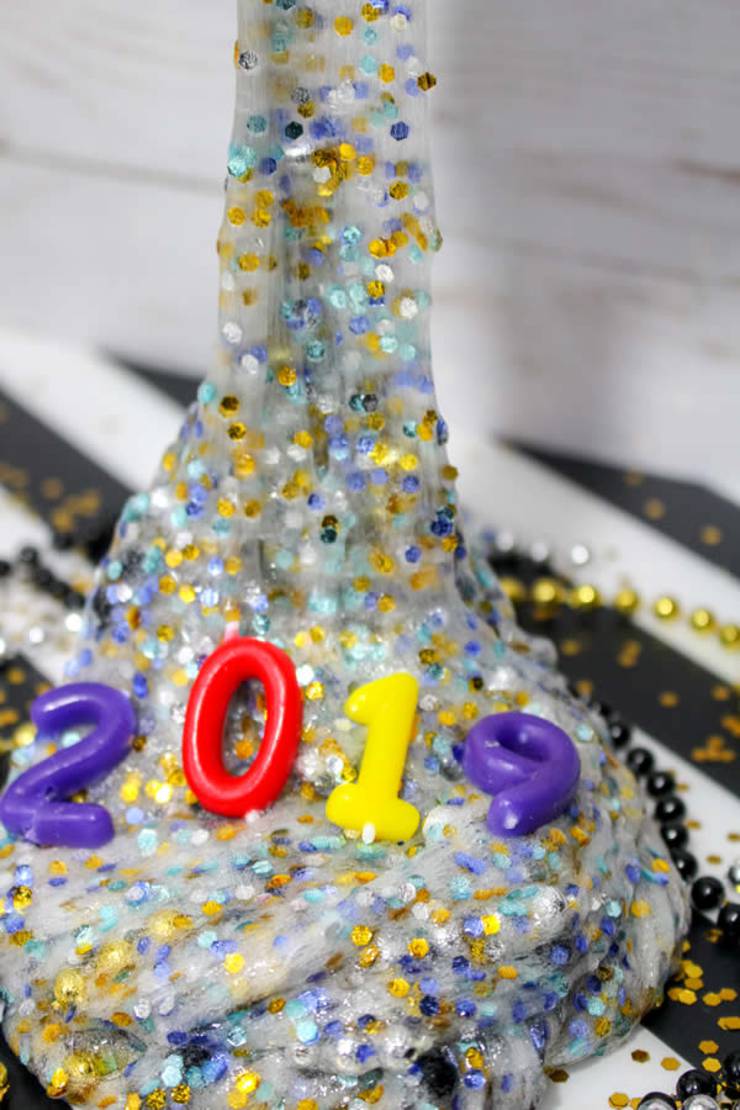 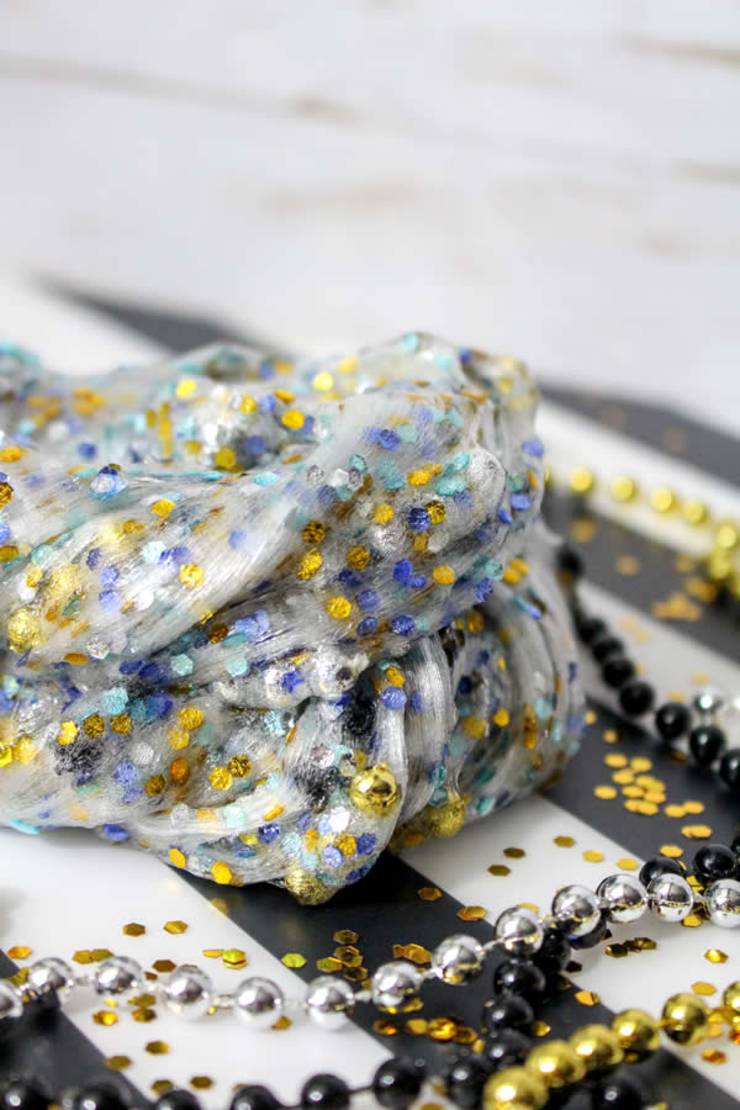