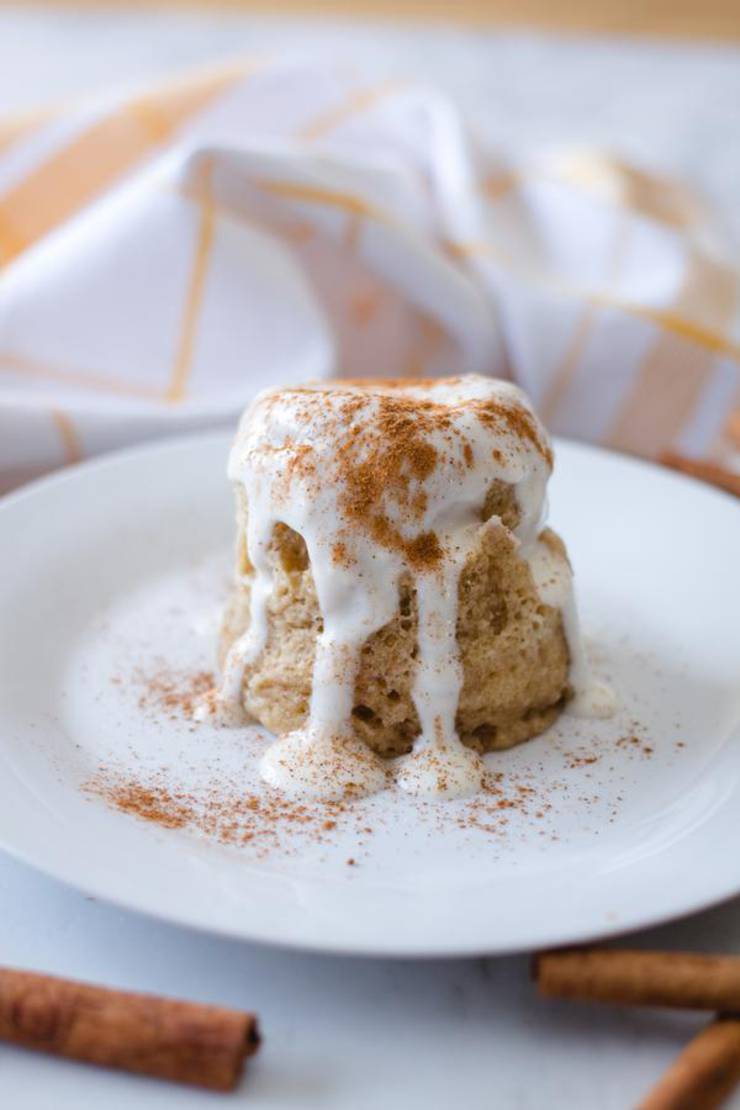 Are you ready for a quick and tasty keto mug cake? Settle in you won’t be
disappointed with this yummy keto cinnamon roll mug cake. A simple keto
recipe that is great for a ketogenic diet. This mug cake is a favorite in our
house and I love that I can whip it up in under 5 minutes.
A delish cinnamon roll keto mug cake made with almond flour. This is one of the
BEST keto mug cakes I have made. You can eat on it’s own or drizzle keto
friendly icing or whipped coconut cream. Follow the step by step directions
for a yummy and easy cream cheese frosting. You will be  surprise at how easy it
is to have a quick keto breakfast, keto dessert or keto snack.
So let’s get ready to bake up an amazing keto mug cake! 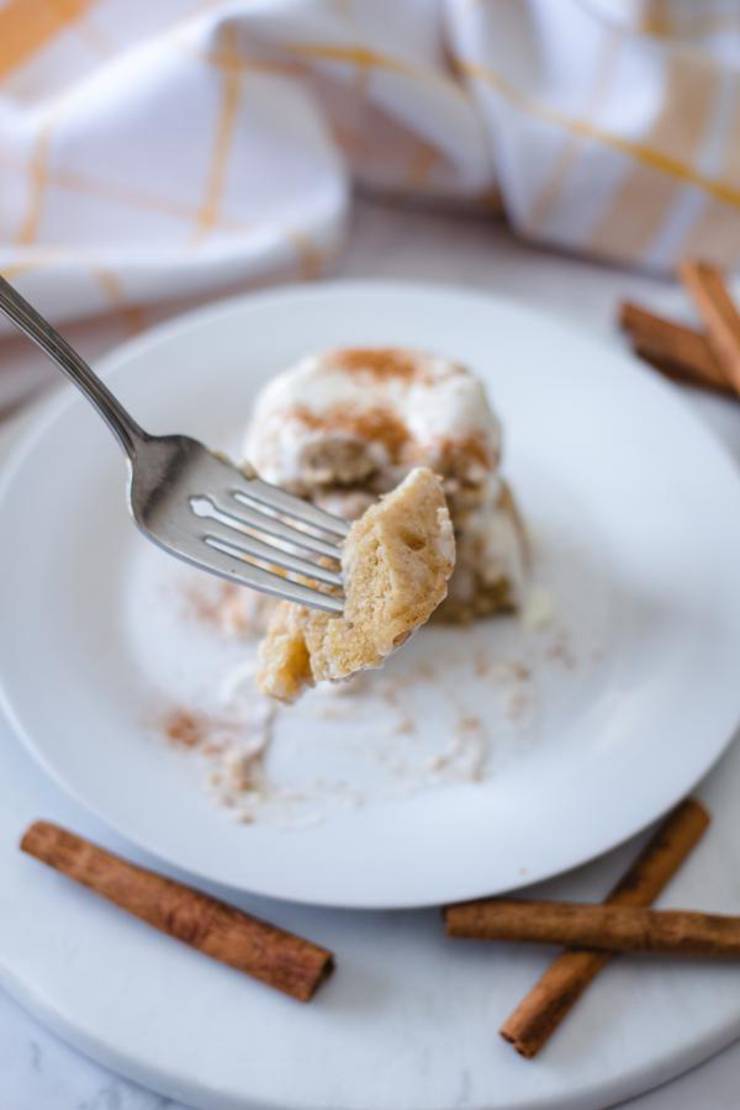 With a few ketogenic essential ingredients you are on your way to making
a yummy  keto cinnamon roll mug cake! A moist keto cake for two or if you
are feeling indulgent for 1. 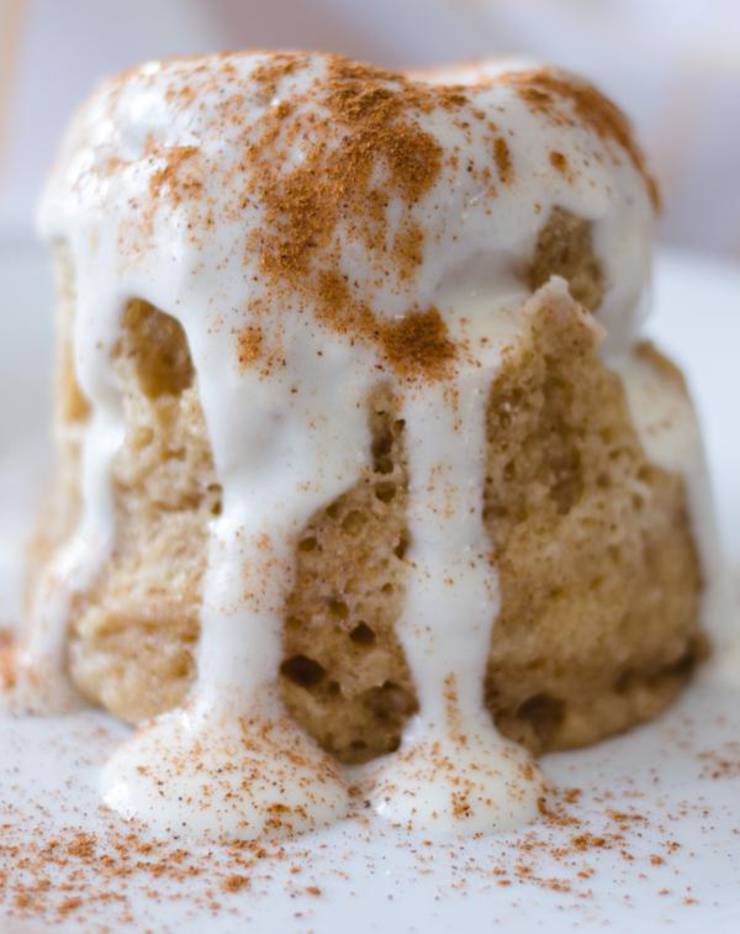 This Keto Cinnamon Roll Mug Cake is perfect for a chilly fall or winter night. The soft, rich flavors of cinnamon are rolled up in a single serve recipe that’s easily made in any cup or mug. No worries about falling of your diet with this delicious recipe since it’s keto-friendly and low carb. All the health benefits without sacrificing flavor.

When it’s chilly outside, if you’re like me, you crave something warm and comforting. The perfect fall night is one that’s spent in front of a nice fire, wrapped in a fluffy blanket, with a warm beverage or dish to enjoy. Picturing that just gives me goosebumps because it’s truly the perfect depiction of why people love fall. Personally, I adore fall, mainly because of all the comfort food that comes to life during the season.

That’s why I made this keto mug cake as a way to welcome the fall season. There’s rarely enough time to throw together an entire batch of cinnamon rolls then wait for them to bake. Plus, there’s not always a need for an entire batch. However, there are those times where you crave a cinnamon roll, but you don’t want to eat unhealthy and you don’t want to have leftovers. That’s where the low carb cinnamon roll mug cake comes in. It’s quick, easy, super delicious, and keto-friendly. There’s no big batch to make or store afterwards and there’s definitely no seconds to tempt you into eating more than you should.

How Do You Make a Keto Cinnamon Roll Mug Cake?

If you’ve never made a keto mug cake before, you’re going to be baffled at how easy it is. Who knew eating healthy was so simple? Well, I did, but now you’ll get to find out just how simple it truly can be. Place all of the ingredients, except the cream cheese and water, in a mug and mix thoroughly. Place the keto cinnamon cake in the microwave and bake for a minute and a half. Allow cup to cool a bit before running a knife, gently, around the contents of the cup. Gently tilt the cup upside down so the contents come out in one piece on a plate. Add the final two ingredients to the cup, microwave for another 25 seconds, then pour it over your cinnamon roll on the plate. That’s it. Few ingredients, little effort, and loads of amazing flavor in the perfect keto cinnamon cake. 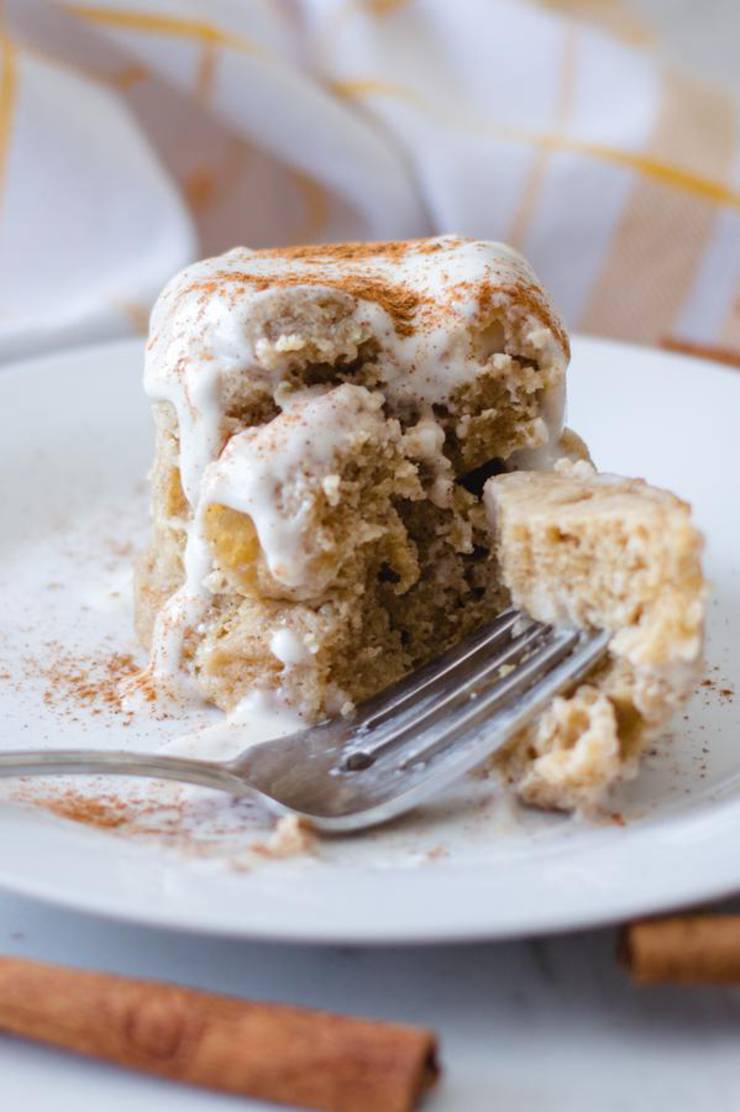 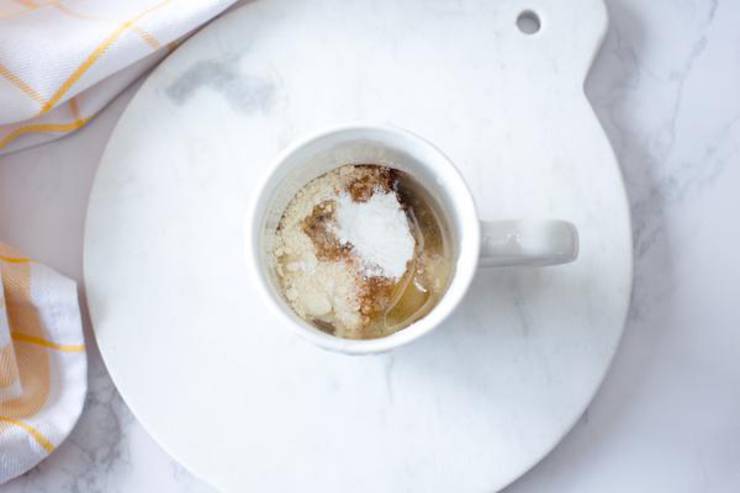 With a fork mix to combined everything

Place in the microwave and cook on high for 90 seconds.

Run a knife around the edges of the mug cake and place on a plate. 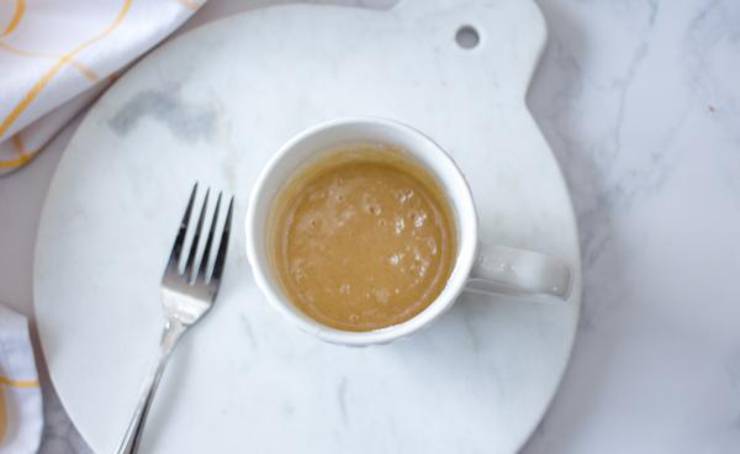 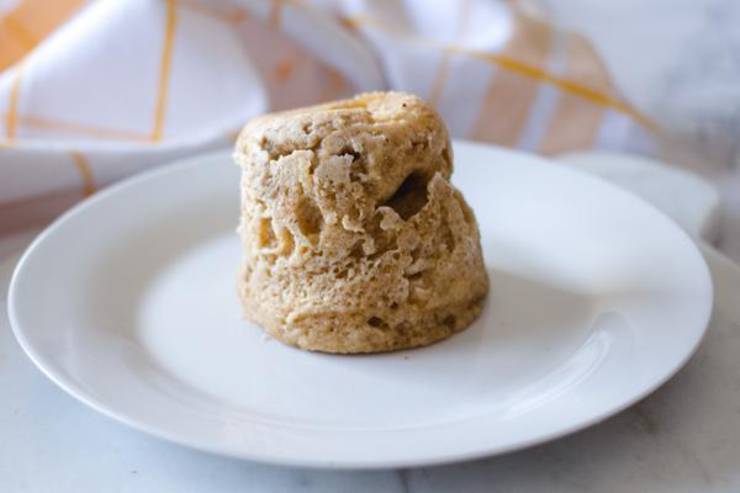 Reuse the same mug, and add cream cheese and water and microwave for
25 seconds 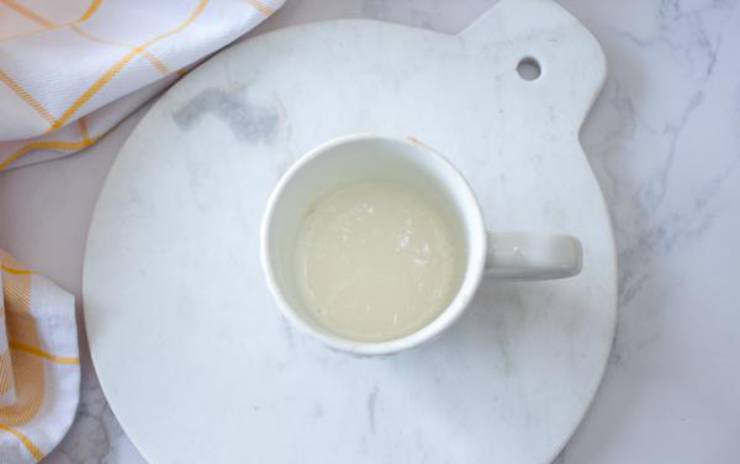 Remove for the microwave and pour over the cake.

Can You Microwave Cinnamon Rolls?

I would not suggest microwaving traditional cinnamon rolls. It would take much longer and they wouldn’t turn out near as good as if they were baked in the oven. This low carb cinnamon roll mug cake works in the microwave because of its size and specifically adapted recipe. Traditional cinnamon roll recipes are not adapted for the microwave and if cooked this way, could result in a poorly cooked and uneven finished product. However, if you would like to use the microwave for your cinnamon rolls, it’s best to cook them one at a time. The best option is in a high bowl, mug, or cup. This surrounds the cinnamon roll with heat in the cooking process, giving it a more even outcome. However, I wouldn’t suggest doing more than one at a time. Start with 45 seconds and work your way up as times will vary from microwave to microwave.

How Do You Heat Up Cinnamon Rolls in the Microwave?

If you have cinnamon rolls already baked, heating them up is a cinch in the microwave. Simply place them on a microwave safe plate or in a bowl and start by cooking them at 10 seconds. Each microwave is different, so you don’t want to overcook them as this will make them tough to chew. If your cinnamon roll is pretty dried out and heating it up didn’t seem to do the trick, place a moist napkin over the top of it before heating it up. The cinnamon roll will absorb the moisture and soften up.

How Do You Heat Up Cinnamon Roll Icing?

Depending on the icing you’re using, most should heat up nicely by being placed in the microwave for 5-10 seconds at a time. It will also depend on whether or not the icing has been stored in a fridge or not. If it’s colder, it will take longer to heat up. Start with five seconds and work your way up. Cinnamon roll icing isn’t very thick so it can burn or crisp up easily.

There’s nothing better than the perfect fall or winter night. Unless, of course, there’s a delicious, warm, and comforting dessert involved. That’s when it becomes the perfect night, all the way around. Don’t waste that perfect night making a full batch of cinnamon rolls or another dessert. Whip up this Keto Cinnamon Roll Mug Cake instead so you can kick back, relax, and enjoy your perfect evening.

If you loved this post, you may just fall in love with these keto posts too! 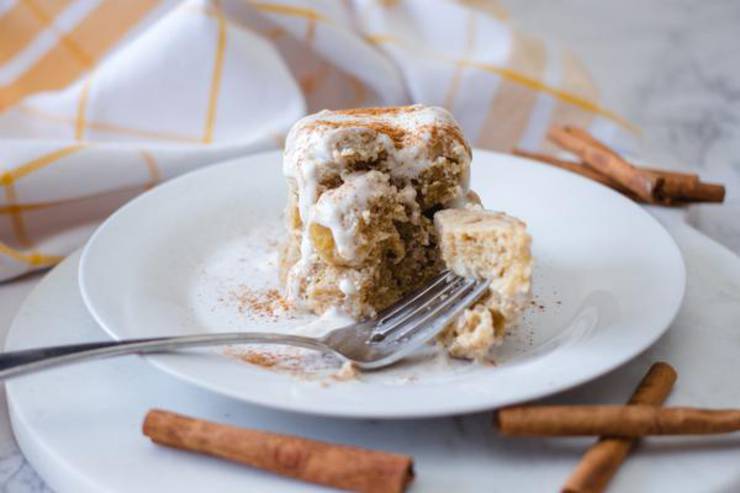 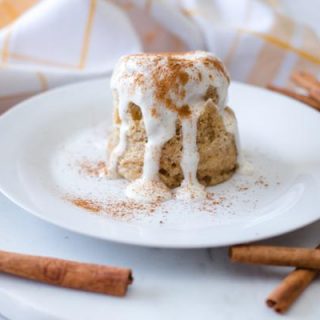 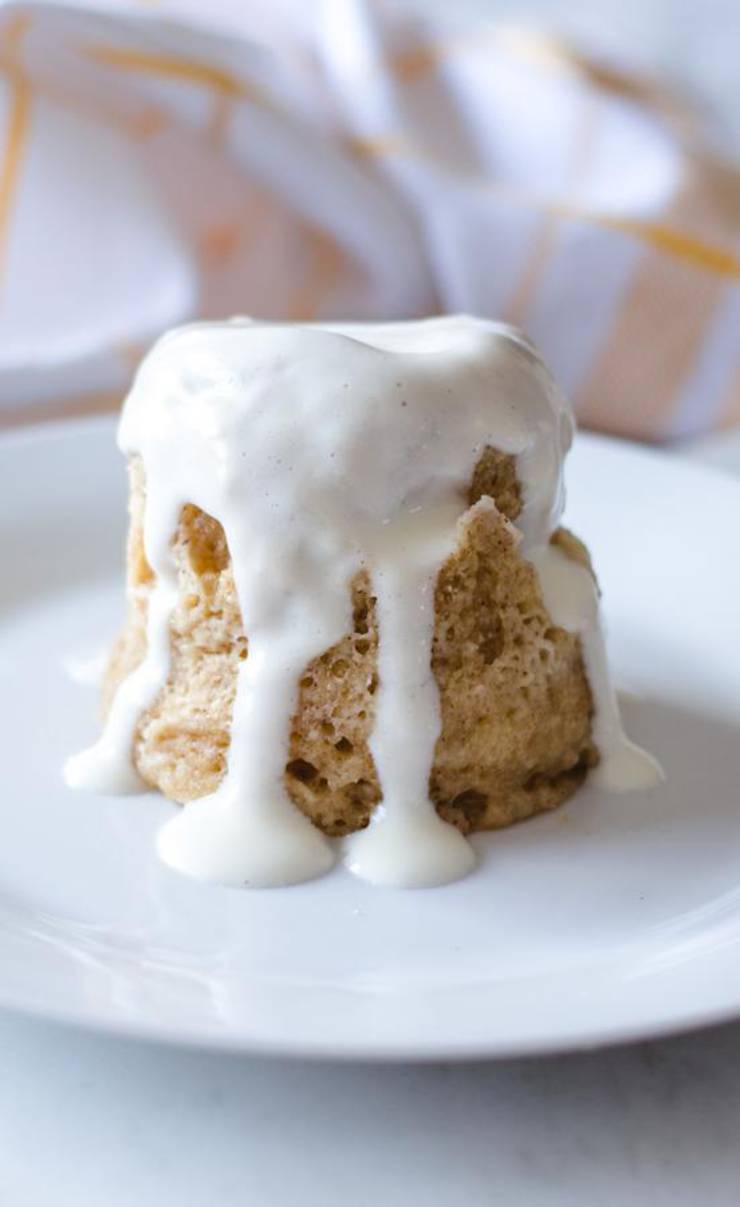 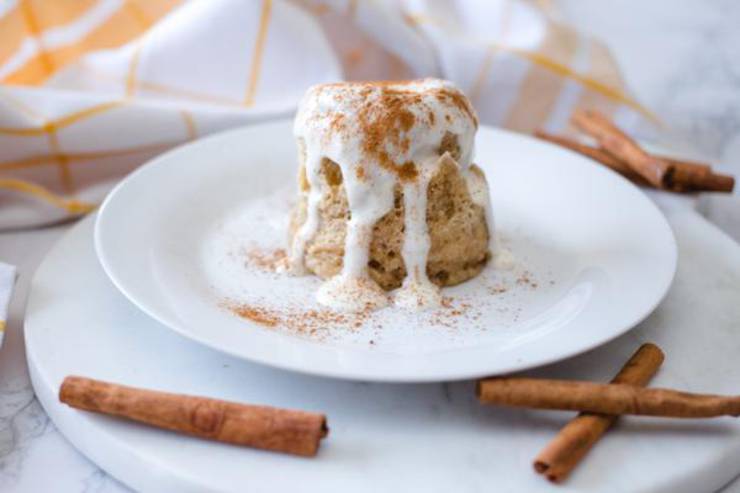